After 37 years as a researcher with an international career, Eliana Catalani decided to completely change her life and dedicate herself to cooking. The result was Spirito DiVino, the restaurant that Eliana runs together with her family in the heart of Trastevere. Seasonality and historic recipes are the drivers behind Eliana’s food. All her dishes are made in-house and she uses only 100% Italian extra-virgin olive oil. No GMOs are allowed, and ingredients are sourced directly from local producers or from Slow Food Presidia.

The recipe and tradition of coda alla vaccinara are said to have originated in Rome’s Regola neighborhood. This poor working class dish is now one of the symbols of traditional Roman cooking.

So-called quinto quarto (fifth quarter), or offal, cooking developed following the unification of Italy and the building of the abattoir in front of the Monte dei Cocci between 1888 and 1890.

The tail, considered an offcut like the head, the hoofs and the innards, was given to vaccinari, tanners, and scortichini, carcass flayers, to supplement their wages.

In her book La cucina romana (1929), Ada Boni offers an initial version of coda alla vaccinara, an expression of the inventiveness and wisdom of the women of the people. In her recipe she includes not only the tail but also the gaffi, ox cheeks.

As in any popular cuisine, the variations can be never-ending. In the course of time lardo and lard have been replaced by extra virgin olive oil and/or ham fat, tomato purée has been replaced by canned tomatoes, and cinnamon, nutmeg, raisins, pine nuts and chocolate have been added, too.

In this recipe, the addition of the cheeks, gaffi in Roman dialect, is de rigueur.

Put lard in a large pan with a mixture of finely minced lardo, onion, yellow carrot and parsley. Fry lightly and add tail and cheeks. Season with salt and pepper and brown all the ingredients. Pour in wine and when it has evaporated, add tomato purée. Cover tail with boiling water, lower heat and leave to simmer with the lid on. Boil celery sticks separately and cut into 6-7 cm pieces. When tail is cooked, add celery and cook together. The dish takes a long time to cook, about 6 hours. The resulting sauce should be dark, thick and tasty.

The recipe originated in the heart of Rome, in the Regola neighborhood, where vaccinari lived in the olden days. The tail is the “queen” of the quinto quarto (fourth quarter), or offal. Other items in the category are tripe, pajata (intestine), heart, spleen and entrails. It is possible to use either a calf’s or ox tail, but the second takes longer to cook.

There are two main versions of the dish. The first is Ada Boni’s in her La cucina romana, published in 1929. She uses the stock from the meat to make a first course and the meat itself to make a second course. The second version is richer and involves a sauce made with bitter cocoa, pine nuts and raisins.

It makes little difference whether raisins or pine nuts or both are used. The secret of the dish lies in the hard work of removing the blood from the meat and the lengthy cooking process. Cut into pieces, the tail is browned over a low heat for about 20 minutes with mixed minced vegetables. Once the tomatoes have been added, the meat takes 2-3 hours to cook. It is ready when it starts to fall off the bone.

The Perfect Side Dish

For more traditional, old-fashioned flavors, finely chop together garlic, onion, parsley, carrot, lardo and prosciutto. Add tomato sauce and blanched celery. Allow the sauce to reduce but not too much. If necessary, add warm water.

Brown minced onion in a little extra virgin olive oil, add tail and brown evenly. Add a pinch of salt and chili. Cut carrots and celery into round slices and add to tail. When carrot and celery start to brown pour over wine and allow to evaporate. Add canned tomatoes, passata and purée, cover with a lid and cook over a low heat for about 3 hours, stirring occasionally. Add pine nuts, raisins and chocolate, give a final stir and serve piping hot.

The following is a translation of a Roman dialect version of the recipe in verse written by the Cesare Simmi, the famous owner of the La Cisterna osteria in Rome’s Trastevere quarter.

For making an original dish.

Take a bit of ham fat,

A clove of garlic and a minced onion,

And chop them up together

With the oil in a skillet that’s there inviting you

To fry the lot, and when it’s golden,

Chuck in the wine. As soon as it evaporates,

Straight in with the tomatoes,

Then, one at a time,
celery, raisins, a handful

Of pine nuts and a good amount of chocolate

And while the sauce cooks

And acquires flavor over a low heat,

Along comes the tail,

Which I’ll now introduce you to.

Get your local butcher

To give you a large, fatty one,

So it’ll not only be tastier

But it’ll also release more juices in the pan;

Cut the vertebrae one from the other,
Then put them in the sauce and cook them through.

The cooking should be just right

But what counts most of all

Is that the sauce shouldn’t be too reduced

And the seasoning should be spot on.

And now the guest can sit down

At the table because the tail is ready.

Bon appetito! And while you eat

Think of cooking straight out of Fairyland!

Other variations on the theme are to be found in the recipe of Adolfo Giaquinto, a cook and journalist and the paternal uncle of Ada Boni in his La cucina di famiglia. Raccolta di ricette pratiche e consigli per ben cucinare Roma. in which he adds a pinch of cinnamon to the oxtail sauce. And in that of Carnacina and Buonassisi who, in addition to raisins, pine nuts and cinnamon, add a pinch of nutmeg. 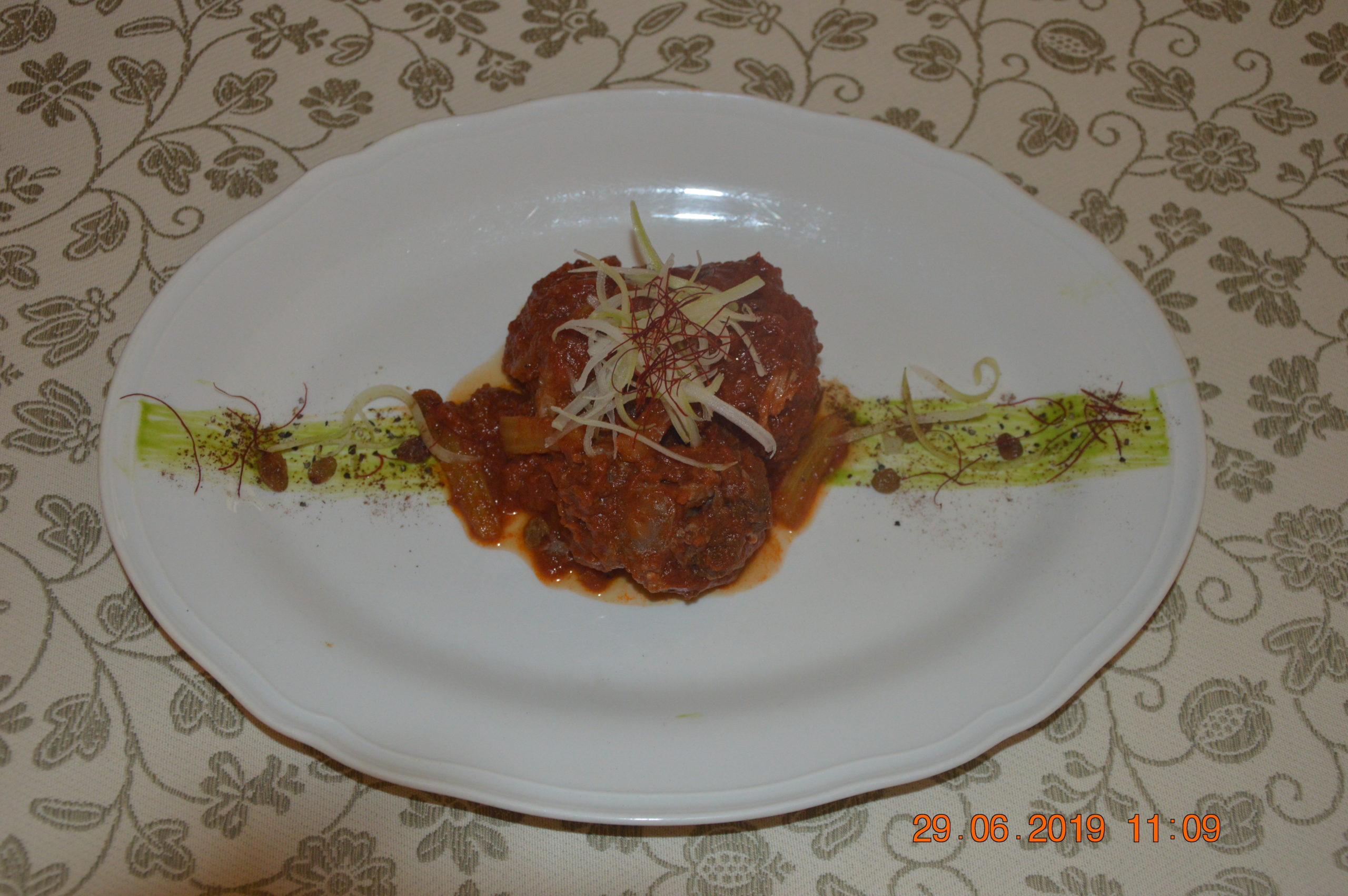