The Locanda San Cipriano is located close to Salerno but its story starts in Florence, where Antonio first began working as a cook. After several years abroad and around Italy, Antonio and his wife decided to return to their beloved south and start their own business, into which they have poured all their passion. The Locanda’s menu always follows the seasons but ranges as widely as Antonio’s experience, featuring typical dishes from inland Campania, Fiorentina beef, Emilian tigelle and local caciocavallo.

A raviolo stuffed with salt cod (“migrant product” in protection of biodiversity and sustainability), on a cream of potatoes (local product) with fried white Pertosa artichoke (Slow Food Presidium) and grated bergamot (Ark of Taste).

I would like to begin by explaining why I have developed this dish, which to a certain extent tells the story of my itinerant existence. The story begins in Florence, where I was studying for my history doctorate, and the university cafeteria where I first met my partner, who was born in Calabria. After the birth of our first child, we decided to return to my native province of Salerno, to Atena Lucana, on the border between Campania and Basilicata, to revive an old restaurant, now the Locanda San Cipriano.

Make a well with flour and add eggs and salt. Knead to a dough and leave to rest.

To make the “bed” for the dish, boil potatoes and blend to a cream.

Roll out the ravioli dough, put the filling at the center and seal. Boil the resulting ravioli.

Boil the artichoke, then fry in a skillet.

To plate, spread creamed potatoes over the base of a dish and place the salt cod ravioli and artichoke on top. Garnish with grated bergamot. 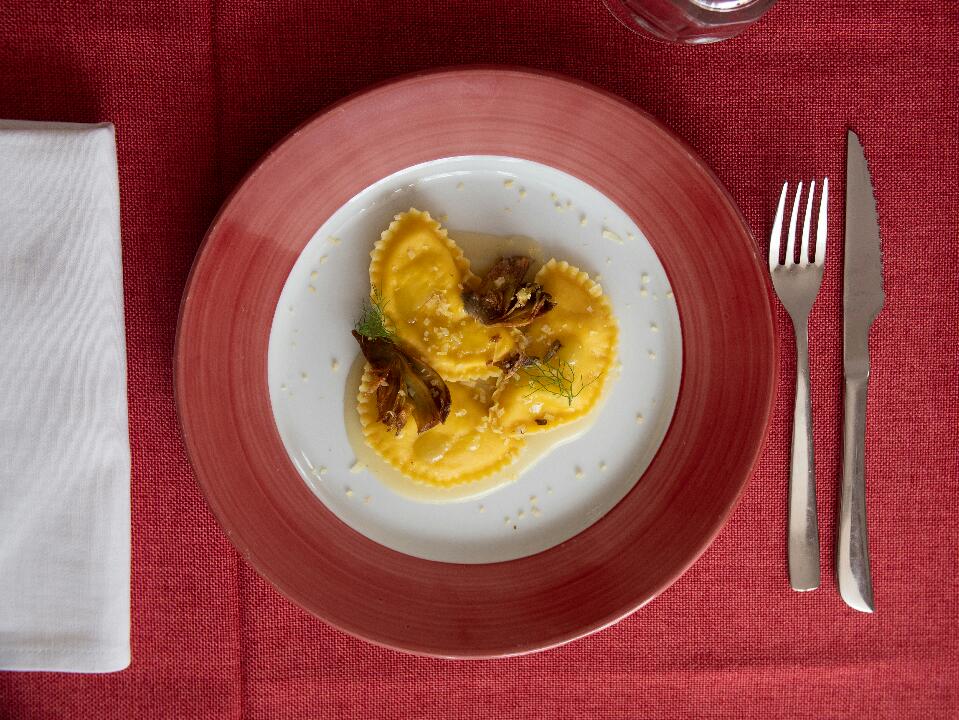